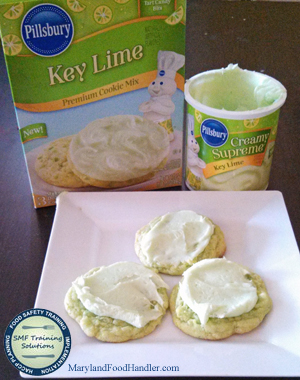 I don’t know if these are new to you but they sure are to me.  I have been seeing them prominently displayed in every store I have been in.  Not really being a baker of sweets I still had to try.  I mean, who can resist Key Lime anything.  Mix and icing in hand I headed home, turned the on oven, followed the very simple one bowl directions and in under 25 minutes had cookies cooked, cooled and iced.  Not bad.

If you are needing a very sweet fix these are a must try.  The key lime flavor was not over powering and just perfect but the extra icing on top was a bit much for this gal.  I preferred just the plain cookie which was soft and chewy.

Would definitely try the other varieties from this line! 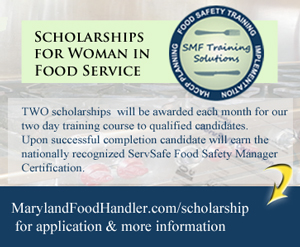 We are so excited to offer this program.  Please share to anyone you know that deserves the opportunity to become trained.  Baltimore County and Baltimore City both require a certified food safety manager on duty at all times.  Having the ServSafe® Certificate betters your chances of becoming a valued member of  management.   You will also possess the important skills needed to advance.

SMF Training Solutions not only prepares you for the exam but we pride ourselves in teaching you real life skills and knowledge that you can take back to your work place and impress the bosses with!

Our small class sizes are perfect for someone that has been nervous about taking the training before.

Don’t hesitate to apply – It may be you we select for FREE Food Safety Manager Training!

How many Food Safety mistakes can you spot in this short but very real story?

A nice Saturday afternoon and some seafood was in order.   We decided to go to a very popular spot (sorry will not name names)  for lunch.  As we walked in there was a party going on in the restaurant area so we decided to head over to the bar side.   I ordered an iced tea and steamed shrimp.

While waiting on our drinks I noticed a table with a small child.  The server, a middle aged woman, clears some dishes and empty bottles from a table, comes behind the bar and begins making what appears to be a Shirley Temple for the child.  She reaches in and full fists out about 5 cherries and drops them in the drink.  “Oh gross”, I tell my dining companion.  Then I said she should know better but often servers are not trained in the basics of food safety.  I brushed it off since she was not my server and I previously and promptly removed the lemon wedge inserted on the rim of my glass.

As we waited for our food I watched a young man come from the kitchen, enter behind the bar wearing a dirty apron, walk to the soda fountain and WHAT!  There it was,  he shoved the fountain nozzle into his water bottle for a refill.  I stared, gasped and commented to my friend to look.  Yes, the young man heard me as he turned to look.  With the nozzle shoved tightly into the hole where a few minutes ago he had his mouth wrapped around it  transferring saliva, he seems unfazed by what I was seeing.

My steamed shrimp came out piping how and I peeled and ate, convincing myself that I am most likely safe from the possible mayhem of what I can’t see in the kitchen.  It appears there seems to be major  lack of training on managements part.  The food handler and server did not seem to even hide what they did.  That shows lack of understanding how much they are putting the public at risk.

Lets just say I am glad I ordered the tea and a food they most likely did not touch after cooking.  I will not be back again.  If I can spot this many critical errors from the bar area, imagine what is going on in that kitchen.

Are you a  recent Graduate that is looking for a summer job but can’t seem to find one even in the busy restaurant / hospitality trade?

SMF Training Solutions wants to improve your chances of being hired and being retained after the summer is over.  Get your application recognized by attaching a copy of your Nationally recognized ServSafe ® Food Safety Manager Certificate.  SMF Training believes your chances of being hired are going to be greatly increased.   No previous food service experience is required to take the class. 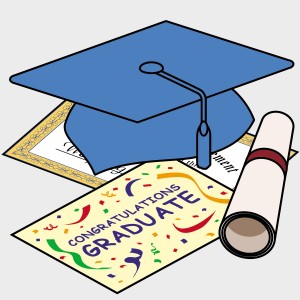 While the certificate does not guarantee you a management position or employment it will increase your value as a potential employee.  Howard, Prince Georges, Montgomery,  Baltimore County and Baltimore City all require one FSM on duty at all times.  More importantly  it demonstrates to the employer that you taken initiative to become a valued member of their team and will require less hands on training.