In a voluntary recall  of expired  Fresh Express heart of romaine lettuce was issued on 09/27.  The possible risk is Listeria monocytogenes.  Listeria is a an organism which can cause serious and sometimes fatal infections in young children, frail or elderly people, and others with weakened immune systems. Although healthy individuals may suffer only short-term symptoms such as high fever, severe headache, stiffness, nausea, abdominal pain and diarrhea, Listeria infection can cause miscarriages and stillbirths among pregnant women.

According to the press release the following products are the only ones affected:

According to a press release issued on 09/25/12 by Falcon Trading Company, Inc./SunRidge Farms of Royal Oaks, CA a voluntary recall of the following products has been issued.  Other Sunland products have already been recalled due to possible Salmonella contamination.

The following was listed in the press release:
RE: Sunridge Farms – Energy Nuggets

In addition to the Sunland recall, a press release was also issued by ” Chattanooga Bakery, Inc., maker of MoonPie® and LookOut!™ branded snacks, today announced a voluntary, limited recall of its Peanut Butter Crunch products with “Best By” dates of 02/26/13, 03/25/13, and 04/29/13. No other Chattanooga Bakery / MoonPie / LookOut products are affected by this recall. ”

The list of known distribution locations can be found here.

I can not explain the reasoning behind the lack of recall in this issue.  However, a FSIS Public Health Alert was issued on 09/20/2012 by the FSIS stating,  “The U.S. Department of Agriculture’s Food Safety and Inspection Service (FSIS) is announcing a Public Health Alert for raw boneless beef trim products imported from Canada by XL Foods, Inc. that may be contaminated with E. coli O157:H7. ”

Oddly enough the FSIS notified CA of its findings on September 3rd.  As stated on the FSIS website, ” After follow-up testing by FSIS and CFIA, the CFIA announced arecall by XL Foods, Inc. of a variety of ground beef products on September 16, 2012.”  But no recall for the US, even though the in question “beef trims” were distributed in the Greater Cincinnati area, Northern Kentucky, Dayton Ohio, Southeastern Indiana, Indiana (except for Evansville), Illinois, and Eastern Missouri areas.

Beef trims are commonly used for the making of ground beef.  Be sure to cook all ground meats to a minimum temperature of 155° to ensure food safety.

Cheesy Potato and Bacon soup.  How much more comfort could there be?   This is an economical and easy recipe anyone can make. 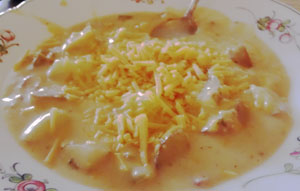 While the potatoes are cooking, dice 6-8 slices of bacon and start browning in heavy bottom pot. I prefer cast iron dutch oven.

Dice 1 cups of celery and 1 cup onion and add to bacon.

Slowly add in 3 cups of milk and 2 cups of chicken stock.

You can add more milk or stock if too thick for your taste.

Cook for an additional 15 minutes over low heat.

Children are back in school and for many of us that means packing lunches again.   You may not realize that some lunch box choices my be putting your child at risk for foodbourne illness.  Many talk about nutrition in lunches, which I am big proponent of, but often food safety is overlooked or misunderstood.

I have included some guidelines for you to follow which are based on the recommended FDA food code.

First let’s discuss what are typical high risk lunch box foods.  There are foods that are  more at risk for the growth of harmful bacteria and you should avoid or take special care of them.   For these “at risk” cold foods your goal should be to keep at 70° or below for no more than 6 hours and never above 70° for more than 2 hours.  Many children’s lunches are packed in the early morning hours and it can be close to 6 hours before consumption. Hot foods should not be below 145° for more than 4 hours.

Here is a list of the common lunch box “at risk” foods.  This list does not include every food that needs temperature control but rather common foods that need special attention.

Second, here are some tips on protecting the food you do pack and alternative foods that make great choices.

I hope this list will help you start thinking about lunches as more than a sandwich and chips.  A good mix of dairy, protein, fruit and carbohydrates will keep your children going strong all day long and keep them safe from the dreaded gastrointestinal discomforts that are commonly associated with excessive bacterial growth on foods.